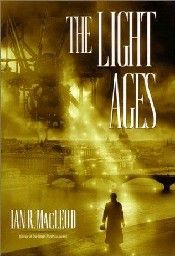 Няма наличност
ISBN
9780743462440
17,90 лв.
Добави към Списък с желани продукти Добави за сравнение
Three centuries before the events of this extraordinary alternate-history...
Three centuries before the events of this extraordinary alternate-history fantasy, the human race discovered the substance aether, which permitted the use of magic to build a guild-dominated technological society. When Robert Borrow is born to a family belonging to a minor guild in northern England, the world has a distinct Victorian flavor. But soon his mother turns into a changeling--an ill effect of aether exposure--and dies. Then he meets Annalise, the lovely ward of an old friend of his mother who is also a changeling. Jumping ahead to the adult Robert, the story finds him in London, writing for a radical newspaper bent on overthrowing the guilds' rule. The complex story line takes Robert to places high and low, into the arms of the daughter of the equivalent of a duke, and through travels, travails, battles, plots, and terrifying discoveries--some in his old home town, and some in the company of Annalise. If MacLeod's narrative technique falls short of perfection, his characterization, world building, and command of the language do not
Нови книги от тази подкатегория