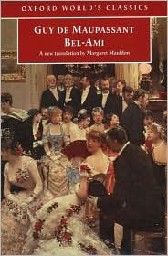 BEL-AMI. “Oxford world`s classics“. (GUY DE MAUP
Преминете към началото на галерия със снимки
Maupassant's second novel, Bel-Ami (1885) is the story of a ruthlessly ambitious young man (Georges Duroy, christened 'Bel-Ami' by his female admirers) making it to the top in fin-de-sicle Paris. It is a novel about money, sex, and power, set against the background of the politics of the French colonization of North Africa. It explores the dynamics of an urban society uncomfortably close to our own and is a devastating satire of the sleaziness of contemporary journalism. Bel-Ami enjoys the status of an authentic record of the apotheosis of bourgeois capitalism under the Third Republic. But the creative tension between its analysis of modern behaviour and its identifiably late nineteenth-century fabric is one of the reasons why Bel-Ami remains one of the finest French novels of its time, as well as being recognized as Maupassant's greatest achievement as a novelist.
Нови книги от тази подкатегория